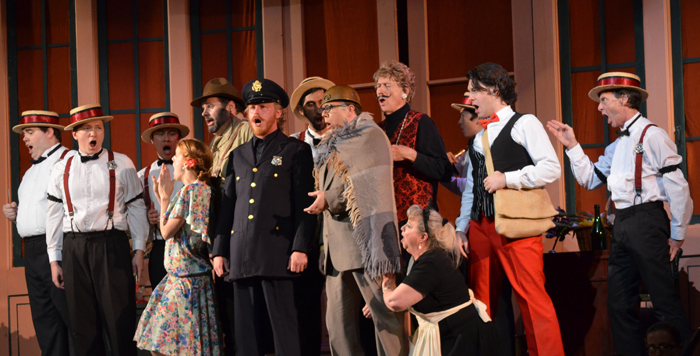 Larry Murray: For someone who claims not to like opera very much, you sure seemed to enjoy The Barber of Seville at Hubbard Hall, Gail. Maybe because it was one of the ultimate examples of Opera Buffa which meant it is about things the local Italians could identify with, in language that was drawn from the vernacular.

Gail M. Burns: My great-grandmother, Magdalena Gandolfo, must have been watching over me! But seriously, what’s not to like when handsome gentlemen, and a pair of pretty ladies, are singing and carvorting for my pleasure? The English supertitles kept me clued in to the plot, and the clowning is universal. Was Chico Marx in this one?

Larry: I love that the opera has a delightful story that borders at times on farce. While there are a lot of zany romantic moments, deceit and trickery to keep us involved in the story, it also has some pretty wonderful music. Written in 1816, Gioachino Rossini kept Il barbiere di Siviglia simple and purely comedic, from the settings, to the words and the length – two acts, which means it is shorter than many of the opera seria which can go on and on. The form lasted from about 1700 to 1850. Mozart’s Marriage of Figaro (Le nozze di Figaro, 1786) has more drama and pathos while Donizetti’s Elixer of Love (L’Elisir d’Amore, 1832) is even more romantic. There are a lot of wonderful characters and arias in Barber of Seville, which did you fall in love with?

Gail: Patrick McNally just won my undying admiration as Figaro. His opening aria, Largo al factotum, has long been a favorite, and is the one most non-opera folks know from this piece. McNally has an amazingly rich and resonant baritone. But I also very much enjoyed the excellent bel canto tenor and clowning skills of Luke Grooms as Count Almaviva.

Larry: The story behind The Barber of Seville is one about love and marriage, and the lengths some people will go to in its name.

Gail: The elderly and crotchety Doctor Bartolo (Andrew Adelsberger) wants to force his young and beautiful ward, Rosina (Abigail Levis), to marry him. But she is in love with Count Almaviva, who is wooing her under the name of Lindoro to ensure that she wants to marry him for love and not for his wealth and title. Figaro, the town’s barber and general factotum, agrees to help the Count woo and marry Rosina in exchange for a handsome sum of money. To gain access to the Doctor’s house the Count desguises himself as first a drunken soldier, and then a foppish music teacher, a doppelgänger of the Doctor’s accomplice, Don Basilio (Ryan Allen). The Doctor’s saucy maid, Berta (Anneleise von Goerken) and narcoleptic butler Ambrogio (Peter Subers) add to the hilarity. And, of course, true love wins in the end and Figaro gets his cash.

Larry: It was easy to fall in love with the orchestra since every one of the 19 musicians did a splendid job, and the quality of the sound that conductor Maria Sensi Sellner was able to yield from her musicians was nothing short of incredible. The Hubbard Hall Orchestra sounded like a resident chamber group that had been playing together for years. Part of that has to be the leadership and expert playing of Melanie Dexter (Concertmaster) since the string section had a lush and sweet richness of sound that usually only comes from larger forces that have played together for years. But it wasn’t just the strings, the reeds, too were extraordinary, and when you think that the brass and winds consisted on a single Horn and Flute, the sound they made was far beyond their modest numbers.

For all my gushing about the orchestra, though, they never drowned out the voices, did they.

Gail: No, they didn’t, although for most of the show they are placed between the audience and the singers, as is traditional. Of course, opera is the one place you never have to worry about the singers being able to project, they have incrdible strength and breath control. Grooms, McNally and Levis all performed astonishing vocal gymnastics, and at Hubbard Hall you are close enough to watch how their posture and breathing creates those sparkling bel canto (literally, “beautiful singing”) trills and runs. 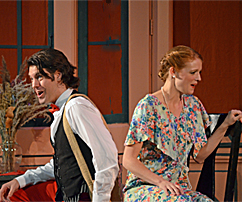 Larry: Constantly flowing, unforced airflow is required to produce and sustain these so-called “legato” phrases in the bel canto style, in order to deliver all those vocal ornaments. The arpeggios produced were once thought to be a secret technique, and indeed even today teachers have to help their singers recognize the sensations they feel when producing the difficult tones. It is an art still being passed from mentor to student today. That Hubbard Hall Opera runs a conservatory to continue this and other operatic traditions is one reason we have such wonderful opera performances in our area.

Gail: I am sorry that we missed their conservatory students’ production of Gilbert and Sullivan’s Trial By Jury which is running in repertory with The Barber of Seville August 14-25. That brief and funny piece is a perfect introduction to opera and operetta for school aged children, and with pay-what-you-will tickets and a suggested price of $15 it is an affordable outing for families. Barber of Seville is ridiculous reasonably priced too – $35 general admission and $15 for students. Absolutely amazing! 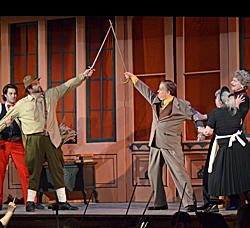 Larry: One of the accomplishments of Rossini was his standardizing the four characters. There is of course the prima donna soubrette (Levis’ bright and light Rosina ); a light, amorous tenor in the form of Count Almaviva, sung by Grooms and who impressed from his first aria Ecco ridente in cielo; a baritone capable of lyrical, mostly ironical expression which was of course Figaro himself, with a brilliantly sung Largo al factotum by McNally; and a basso buffo as Dr. Bartolo whose vocal skills, especially on A un dottor dell mia sorte are largely confined to clear articulation which were artfully delivered by Adelsberger . We also heard a wonderful lyric mezzo, von Goerken whose antics as Berta the maid belied her serious musicianship with Il vecchiotto cerca moglie. Allen as Basilio the music teacher was also at the top of his game both vocally and as an actor. The featured singers also include Subers as Ambrogio and Nick Kilkenny as Fiorello.

The settings in which the singers found themselves, especially in the intimate confines of Hubbard Hall can be a challenge, how do you think the production itself worked out, how did the director Andrew Nienaber compensate for the lack of stage depth and wings?

Gail: The only aspect of this production that disappointed was the set by Karen Koziol and Mark di Giovanni. It did push the action downstage onto a fairly narrow playing area, and it wasn’t particularly well painted. Past HHOT productions have fared better in this regard. But Sherry Recinella’s costumes for Nienaber’s 1937 New Orleans setting were professional and flattering. I loved Figaro’s red pants and armbands which made him resemble a living barber’s pole. And the blue dress Levis wore in the second act was a stunner.

Larry: During intermission I meandered over to the piano and asked Nadine Kulberg how she made it sound so much like a clavichord. For those unfamiliar with the instrument, it is the one you hear during recitative (partially spoken, partially sung) passages playing chords to keep the singers on key, and the moments themselves feeling musical. The instrument makes its sound by striking brass or iron strings with small metal blades called tangents. Kulberg pointed out that she was using a spinet (very small) piano, playing the notes in a more staccato style, and using very little pedal so the sounds quickly die out rather than linger as with piano playing. It worked beautifully.

That was just one of the many creative economies that Hubbard Hall Opera Theatre makes in order to perform opera in Washington County and the surrounding area it serves. I include the Berkshires as one of their neighbors. Gail you and I certainly enjoyed this performance, and the company seems to be getting better at both the opera and the theatrical aspects, don’t you think?

Gail: HHOT has changed opera for me from something big and scary that happens in a brightly lit box half a football field away to a theatrical experience. In a scene where Rosina is taking a singing lesson from Don Basilio, she asks to “sing the aria from that new musical everyone is talking about.” These opera buffa were just exactly that, the popular musicals of the 18th and 19th centuries. This company has dissolved the line between musical theatre and opera for me.

Hubbard Hall is on the second floor of an historic building, surrounded by community owned retail businesses.

Larry: There was a third person who traveled to Cambridge, New York with us, and on the way to the car she said something very interesting. She attends a lot of the Met Live in HD telecasts: “But you know, I think I enjoy opera at Hubbard Hall just as much, if not more than those big productions. There’s nothing like hearing an opera’s music as it was meant to be experienced, with no electronics between the orchestra and singers and my ears.”

Gail: Berkshire County residents keep referring to Cambridge, NY, as “way up there.” In fact, it is slghtly closer to Williamstown, where I live, than Shakespeare & Company and Tanglewood are down in Lenox, and the 45 minute drive is much prettier and less hectic. The street level of Hubbard Hall is occupied by The Village Store and The Valley Artisans Market, which are often open around show times, and right in the same block are Battenkill Books and Over the Moon Beads. The Cambridge Antiques Center is just down the road. And of course you can pick up some scrumptious cheesecake from the nuns of New Skete. All this and world-class opera too!

One thought on “Gorgeous Singing, Fun Staging of “The Barber of Seville” from Hubbard Hall Opera in Cambridge, NY”